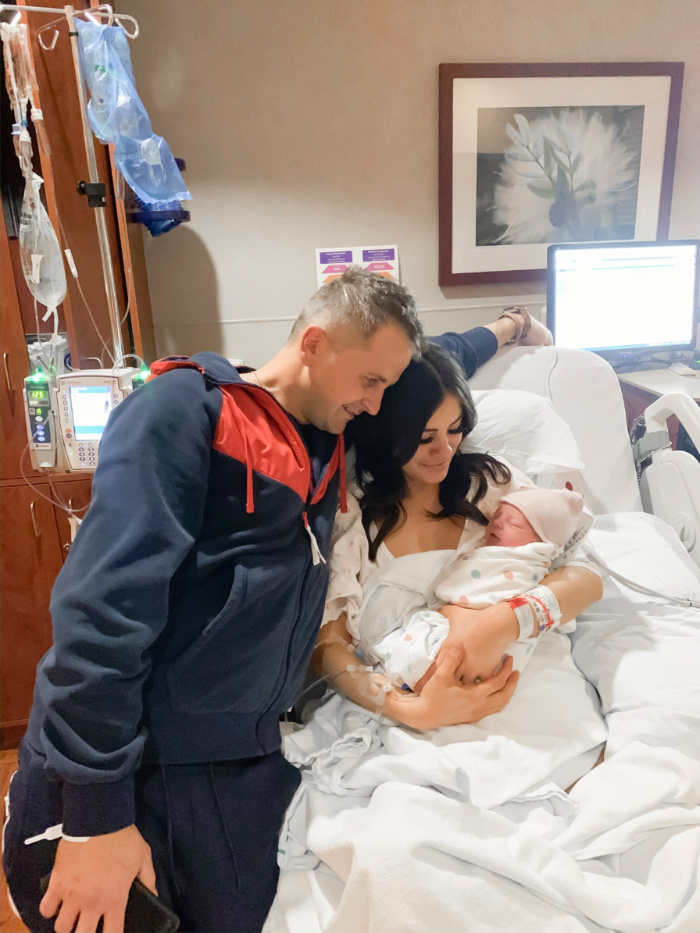 It’s been just over two weeks since baby Luke made his entrance into the world and lit up our lives. He was born on 02/22/20 at 12:05 AM, exactly a week before his due date which actually fell on Leap Day this year! He has been such an angel baby and we still can’t believe he’s ours. We laugh at who we have become because all we do is talk about how perfect he is, and when he’s napping or we’re eating, etc we end up looking at videos/pictures of him haha! You can say we’re a little obsessed with him. It’s true, your heart really does double in size and we thank God for our healthy, beautiful miracle.

If you follow along on Instagram, I saved a few videos from that day on my highlights. Most of my pregnancy, I had Braxton Hick’s contractions and kind of just put up with them. They weren’t painful, but between working the ER and building/moving, I didn’t have the time of ‘laying down for an hour until they go away’, I would just try my best to stay hydrated and not push it too much. Over a week before I started having real contractions, the Braxton Hick’s started getting stronger and would actually feel them vs randomly touching my belly and it feeling tight. I told my husband almost every night for a week that he was coming lol! I was sure of it. Mind you, we moved into our home, less than a week later I got knocked down with the flu for two weeks straight and then had two days where I felt ok to run errands before he made his arrival lol! It’s been a whirlwind, let me tell you!

On Wednesday 02/19/20, around 9pm I started having regular painful contractions- I knew these were definitely not the false alarm Braxton Hick’s ones I’ve been feeling because they were actually painful vs strong tightness across my belly. From about 9pm to 6am, I timed the contractions to being every 8-15 minutes apart. Sometimes I would catch them at 5 minute intervals, but not long enough to convince myself to pick up the phone. Also, I had an eyelash appointment the next morning, so I kept joking with my husband that I just had to make it to my 9am last appointment and then he can come haha! After the flu, they were looking a little crazy haha-obviously kidding but I mean it would be nice! When I realized they were getting more painful/regular, we were on the couch watching TV and I was like ok, I think tonight is really the night-so I finished packing my hospital bag, we both cleaned around the house, showered and then went to bed. I was up basically all night because every time I would half fall asleep, another contraction would come and wake me up. I had no idea this was a thing, but as we got closer to 6am, they got farther and farther apart and was able to sleep for two hours before you know, went to fill my lashes haha! I thought once regular contractions began, they would progress and after 9 hours of fairly regular contractions, to have them basically completely stop was shocking. Anyways, I woke up to my alarm to make it to my appointment, ran some errands and only had maybe 1-3 contractions an hour throughout the whole rest of the day.

Around 8pm that Thursday night, I started having regular contractions again, but this time every 5-7 minutes apart, which quickly turned into every 5 minutes. At that point I was like oh boy, ok this is it, but also not freaking out because my water didn’t break and yesterday’s set of regular contractions ended up going away after several hours. We had the carseat out but didn’t have it in the car, so here we are at 8:30pm trying to figure it out with a Youtube video while I’m counting contractions on the app. It was so interesting because they come in waves… you feel them coming, you die for a second then they fade away and it’s like nothing ever happened until the next one. After we put the carseat in, I took a long shower, finished packing the rest of my toiletries, and printed a quick birth plan then decided we should probably get going. BTW my birth plan had like 5 bullet points on it and the first said epidural STAT haha! Obviously, pretty laid back over here. Contractions were about 4-5 minutes apart still, but getting pretty unbearable. I called the triage line on the way to the hospital (which was a little after midnight) and told my husband a few times, we’re going to have our child in this car haha! I literally felt like he was coming out of me! Oh, and at this point I’m running on two hours of sleep in 2 days. 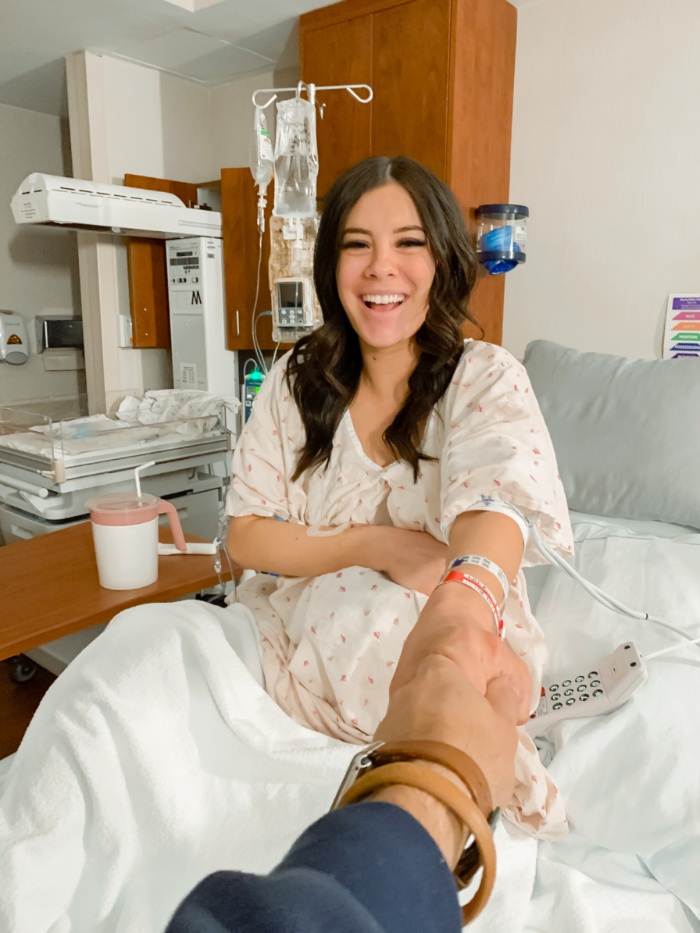 We made it to the hospital, got checked in and eventually the midwife came in and told me I was only 3cm dilated. I’m pretty sure my mouth hit the floor. I couldn’t believe after pretty much two days of regular contractions, we were only at a 3 AND it’s not like I was on bedrest lol at one point in that period I was at Target holding on to my shopping cart for dear life because I was having one in the middle of the aisle. I immediately asked for the epidural and she said not yet; I looked at her like she had 7 eyes and was like what?! She said she was going to check me in and then have me walk around to help me progress a little more before we talked about the epidural. At this point the pain was pretty unbearable- when I got hooked up to the monitor they measured 50-60 in strength, sometimes would hit 70-80 which honestly barely remember any labor and deliver content from nursing school over 6 years ago but do know that when I was in full on contractions towards time to push we were at solid 80s in strength. Anyways, we got checked into our room and I laid in bed the whole time trying to sleep in between contractions. I tried to get up and walk but made it to the side of the bed and started seeing stars when a contraction hit so I just stayed put. I was over hurting and the last thing I wanted to do was walk the halls or bounce on a ball, plus, “epidural STAT…” lol!

It was almost 6 am and the nurse came in with the best news ever. I was still at 3cm dilated but we were going to get the epidural within 30 minutes and then they would start me on Pitocin. I literally started tearing up, I was so relieved. I didn’t know what to expect of course, but knew I wouldn’t be in pain like I was. The anesthesiologist did his thing, left and I needed two doses of medication because my blood pressure dropped a bit and got super nauseous and felt like I was going to pass out while feeling numb from the belly down! I came back around in a few minutes, got comfortable and slept like a baby. I pretty much slept all day long in between the nurses/midwife coming in to check/reposition me. After being up two nights straight, I couldn’t ask for anything more. It was seriously magical! I will say my left leg was completely numb and couldn’t move it at all. It was so strange watching her pick up my leg to help me move around. Thankfully I had full function in my right leg, it was just numb so I was able to rotate around/lift myself up pretty good.

The rest of the day, I pretty much slept. They broke my water soon after and checked me a few times throughout the day. I progressed super slow and even maxed out on Pitocin only dilated to almost 5. At that point we did internal monitoring so that we can go even higher on the Pitocin which is when I finally started to progress-this was well into the day, maybe 5 or 6pm..?. It wasn’t until nearly 10 pm that I was finally progressed enough to start pushing. I had just pushed the epidural button not even 15 or so minutes prior, so the midwife said we’ll give it another 30 minutes to an hour to let it wear off a bit so I can at least feel some of the pressure to ease with pushing. The nurse then checked my vitals and had started getting a low grade fever, I believe 100.4 or 101.4, I can’t remember but we were out of the 99s where I was most of the day. Because it was so long after my water broke and with my temperature going up, we went ahead and prepped for birth. I honestly didn’t know what to expect, but I’ll spare you all the details. I will say thank you to all of you who said that it wasn’t that bad and those of you that kept me up some nights with your horror stories because both made me feel at ease haha! Like I expected the worst but also knew it can’t be that bad-I mean I was pretty numb after all. And to reassure those of you that are also completely and utterly terrified like I was the weeks prior, it wasn’t that bad. I can’t speak to those of you that do it natural- you all are the real rock stars I pushed for about an hour and all I felt was pressure and mostly just watched the monitor to know when to bear down and push because I barely even feel all the contractions. When I did, it felt like tightening in my stomach, almost like strong Braxton Hicks and just pressure when I pushed, but no pain. I honestly expected it to be so painful and miserable, but there was no pain at all, just pressure. After contractions for two days without any pain control, I felt like the rest was a breeze, thank the Lord!

He finally made his appearance at 12:05 am crying for the whole world to hear haha! They cleaned him off, my husband cut the cord and we did skin to skin for some time. It was such a surreal feeling for both of us and couldn’t believe that he was finally here! I wish I could relive that moment because there is absolutely nothing like it! We are so thankful for a healthy pregnancy, delivery and little miracle baby that we get to raise to be light in this world. We pray for God to give us guidance in raising him and keep him safe in His arms; most of all, to tell others about His love and the sacrifice He made by giving us His son to die for us that we may be saved. He has been such a blessing in our lives and we can’t get enough of him!! 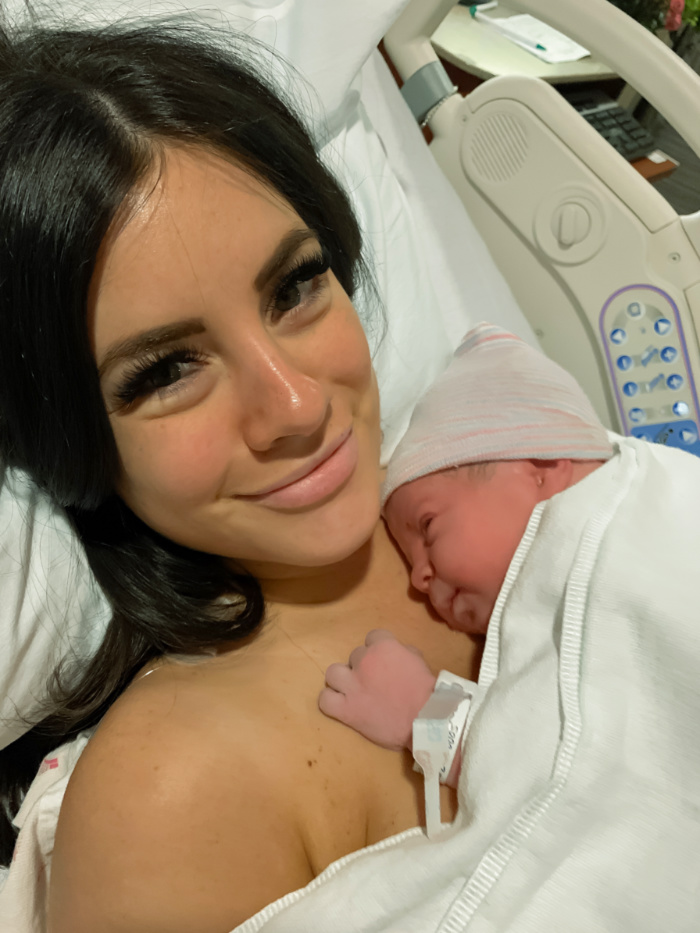 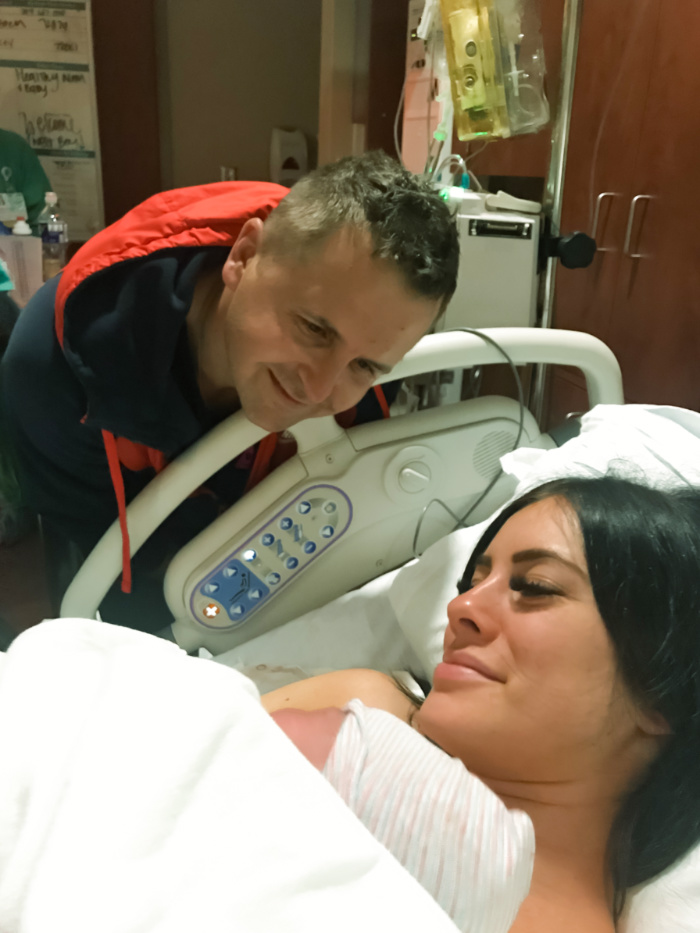 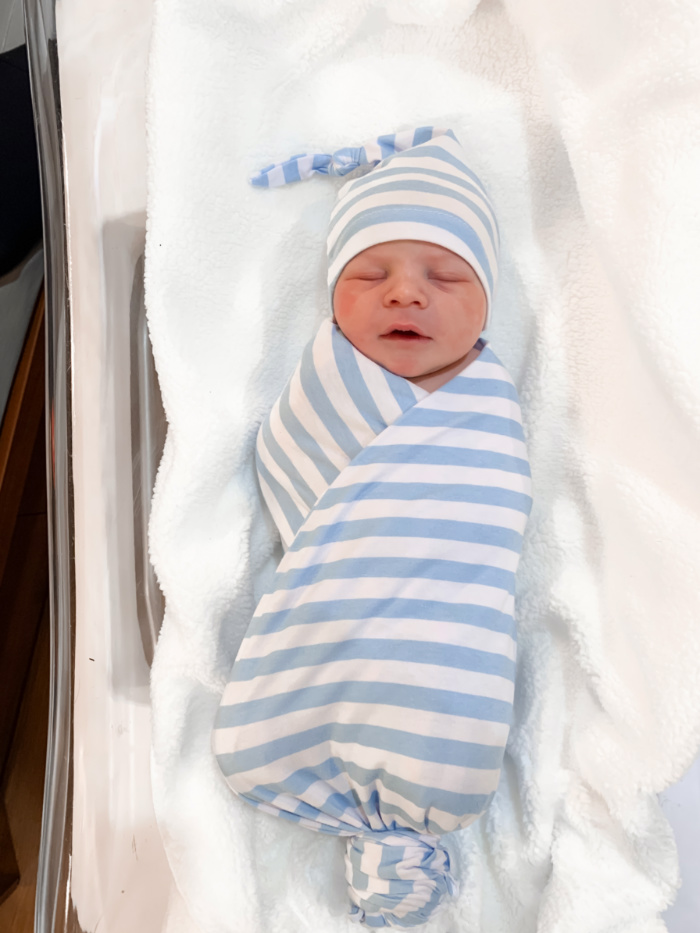 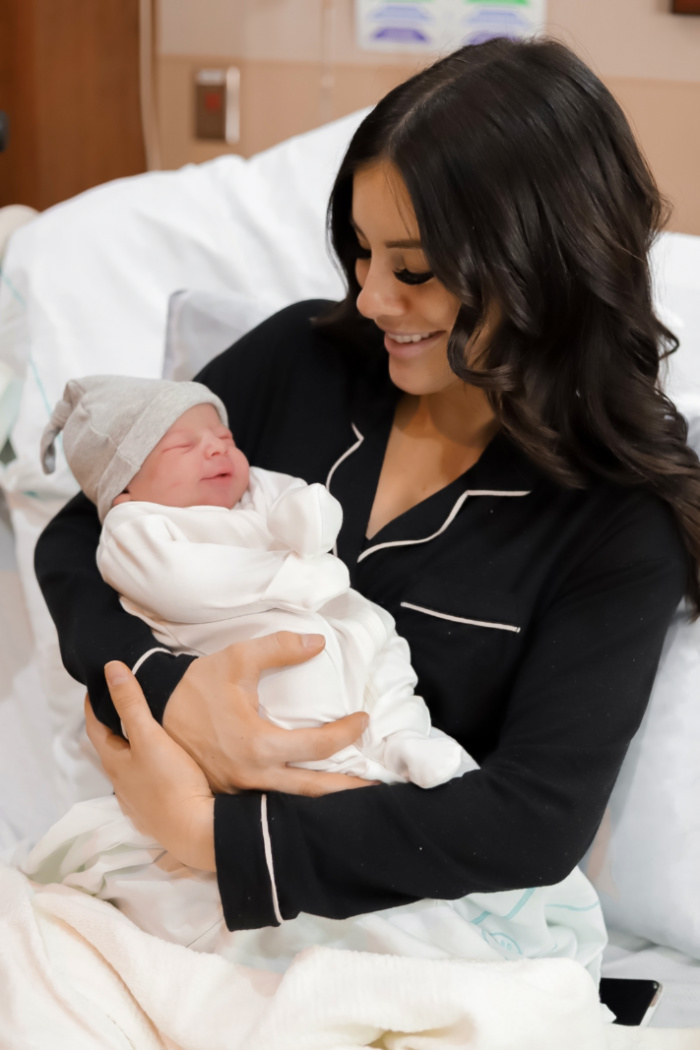 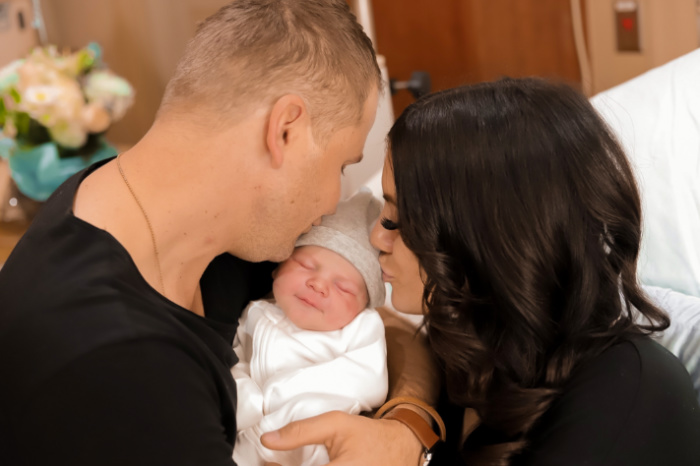 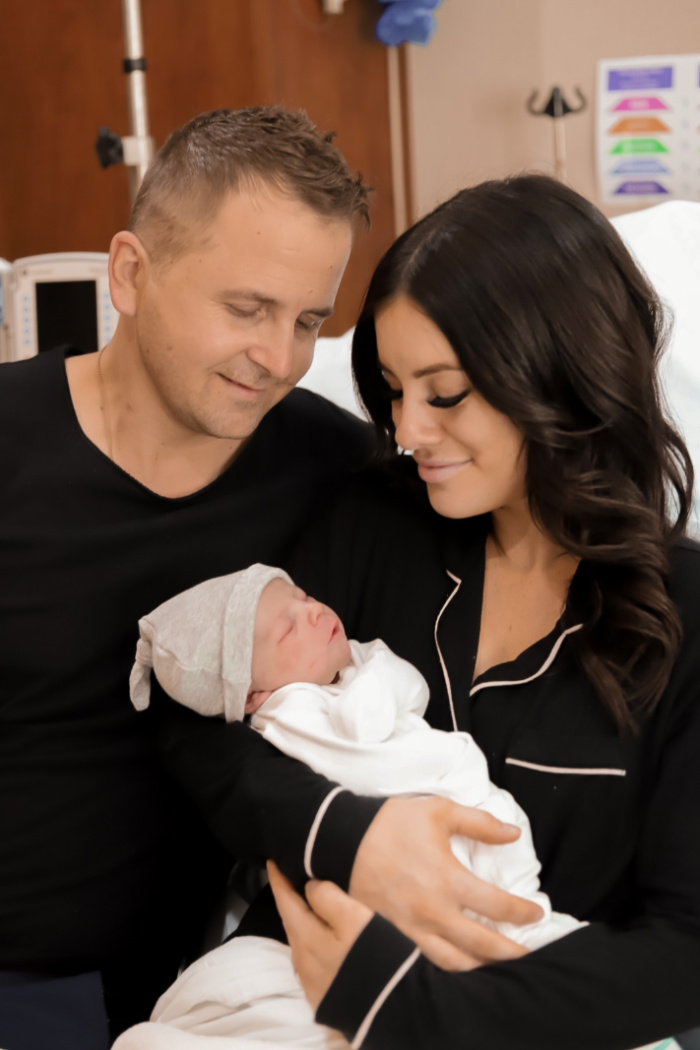 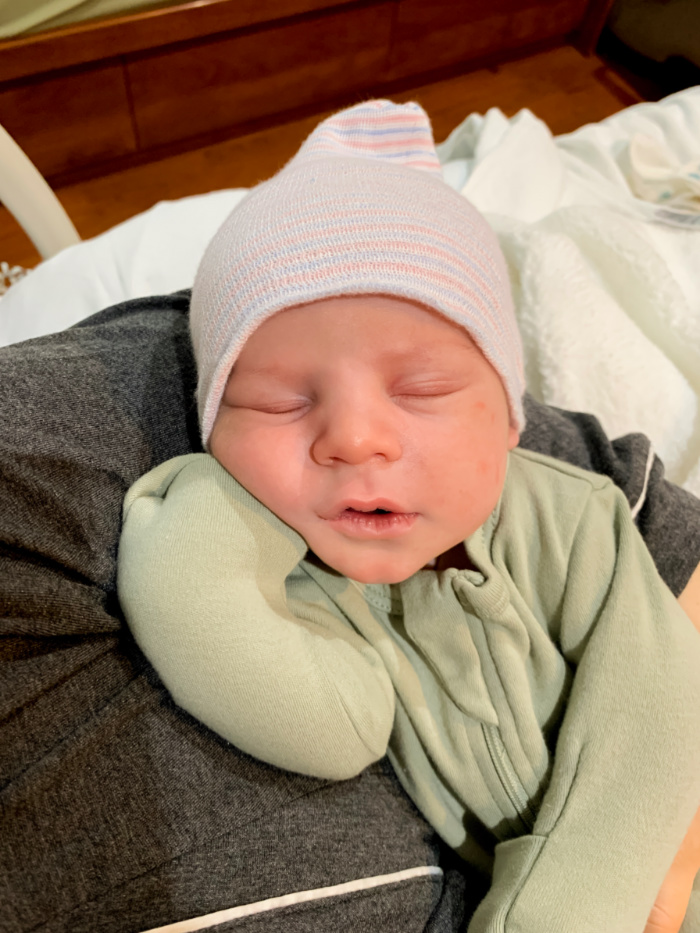