How I Told My Husband I Was Pregnant 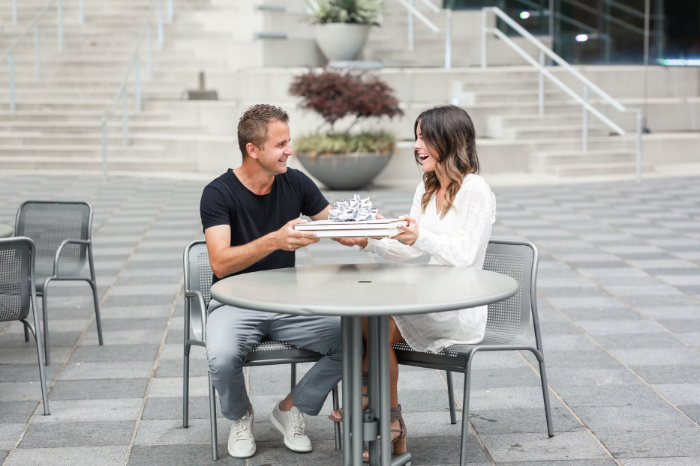 I have looked at these photos a million times and every time I look at them, I still laugh and cry all at the time same! It’s such a special moment and so glad I was able catch may husband’s face on camera when I told him we were pregnant! It’s priceless! Here’s how I tricked him…. 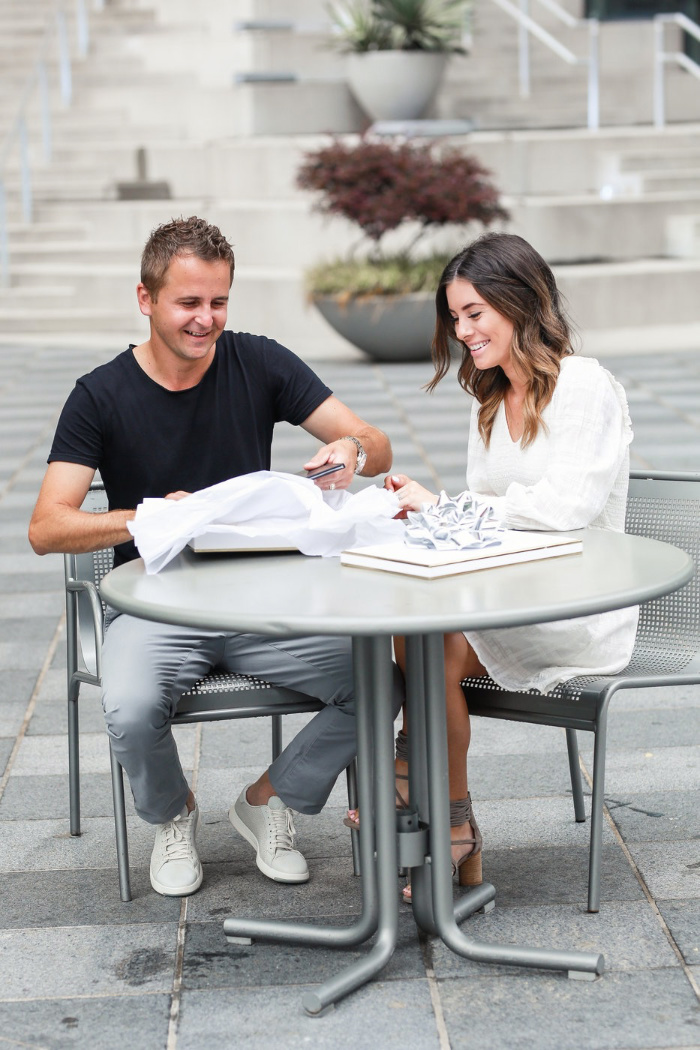 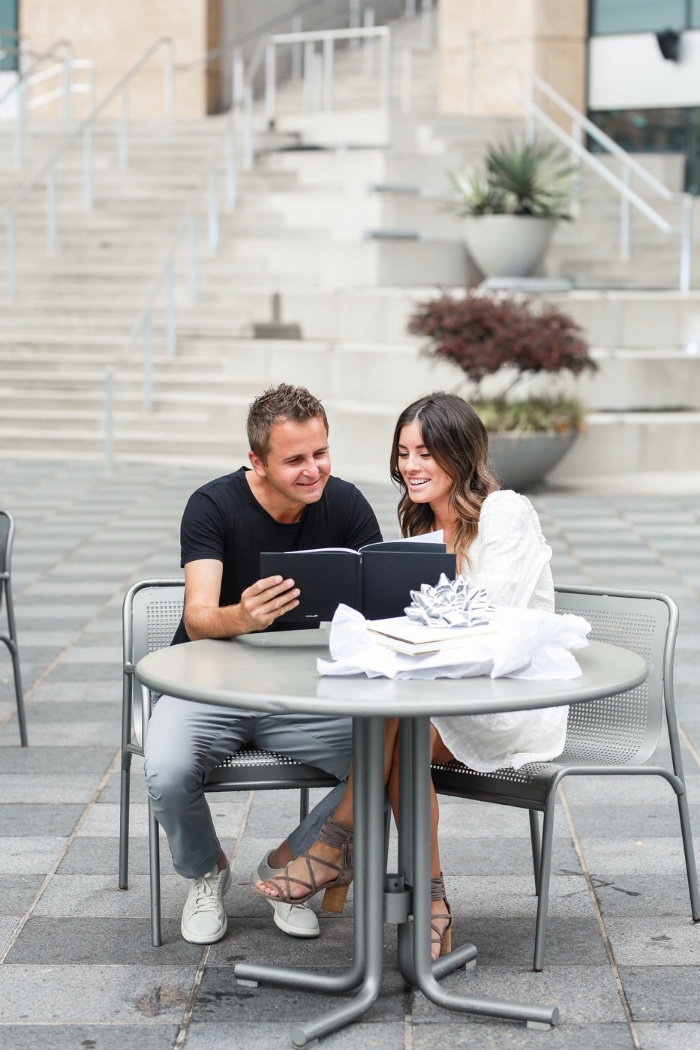 These photos may look a little familiar from THIS post! I took advantage of the setting/getting dressed up to take a few pictures before our “campaign.” For years, I knew that if/when we got pregnant, I wanted to catch my husbands face on camera/video, but never had an idea how to pull it off. After I found out I got pregnant, I started brainstorming and was like duh!! I’ll make it a <fake> campaign that we he won’t suspect a thing and he sure didn’t haha! 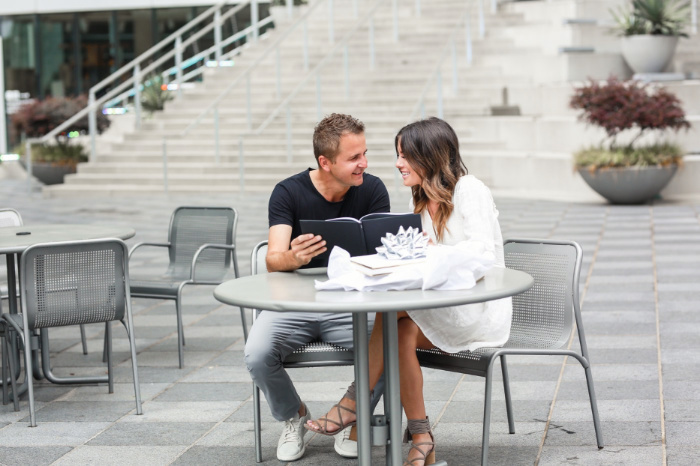 So, I told him we have a couples holiday campaign where I gift him a photo book of memories we have together as a couples gift idea. I told him he’s not allowed to look at it when it gets here because they wanted a genuine couples shoot of us looking at the book, etc. He totally fell for it and for a week after I told him he was like, “they really want me in the photos?” “…like they specifically said for me to be in it? That’s so cool” and he was just so excited to have his first campaign haha! I was like oh man! I hope he’s not disappointed when he finds out its not a real campaign haha!

The hardest part was waiting TWO full weeks to tell him! I found out right away and couldn’t get the photographer until two weeks later between our schedules. It wasn’t so hard the first week because I was like, well I guess this “our” (mine and baby’s little secret) and then the second week I was like ok I’m about to spill the beans, but knew I would be so mad at myself if I did because everything was already set up and going to plan.  Thankfully, he was so busy with the house and I had work to keep me busy…. 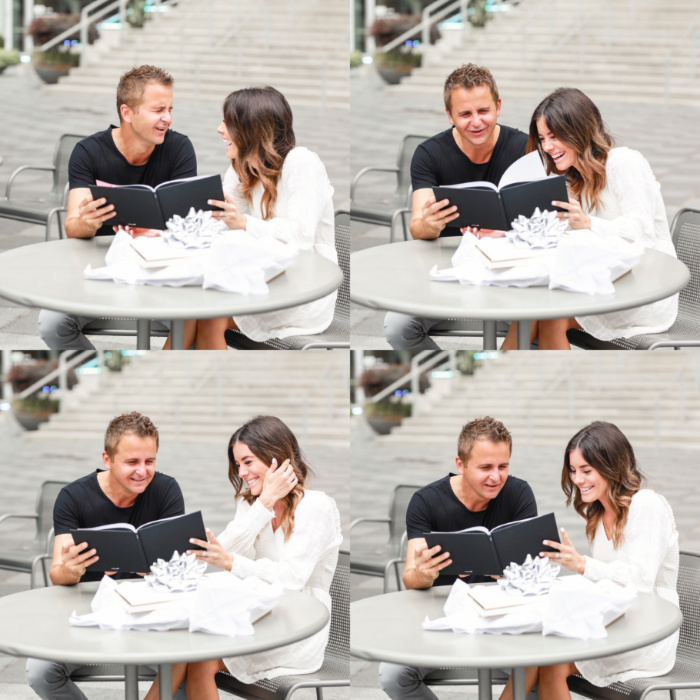 I set up the book by categories. The first page was the couples emoji followed by pictures from our dating days, then wedding related emojis followed by pictures from our wedding then the last (almost) six years of our vacations and memories. Next, was an emoji with a baby and pregnant belly! Around this time, the app where you can turn your face to a baby or old person came out. My husband loathes those haha! He thinks they are so freaky and I can never get him to do it. Don’t get me started on the face swap! I’ve tried to get him to do it for years without any luck haha! Anyways, when he saw the baby emoji, he though the next page was pictures of the face swap hence his face in the right upper hand picture saying “noooo!” then he turned the page and…. 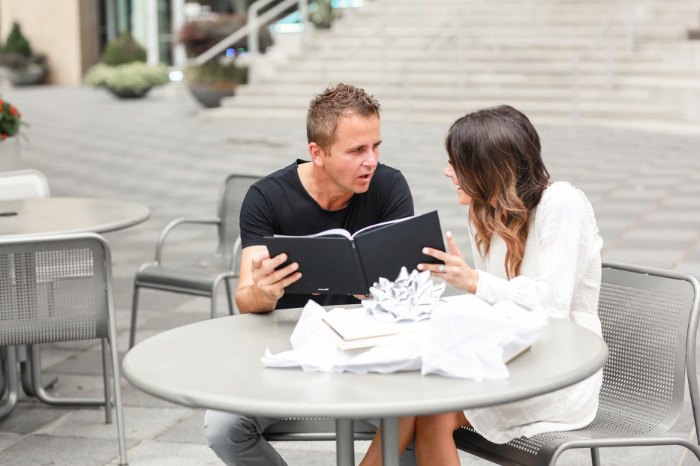 HAHA! I can’t get over his face! So priceless!!! 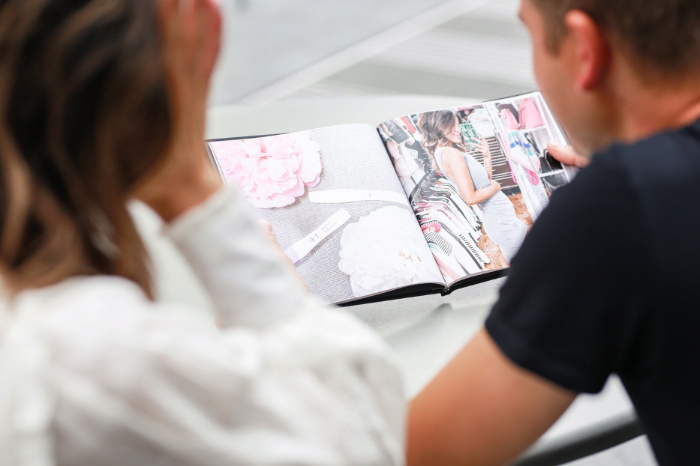 The page following the baby emojis 🙂 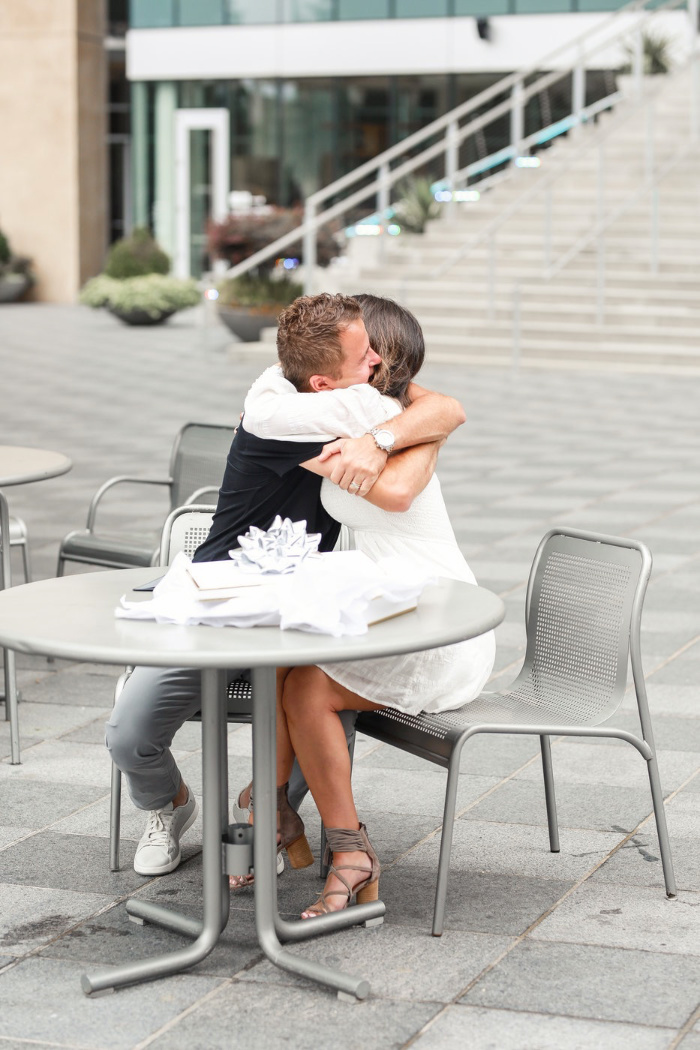 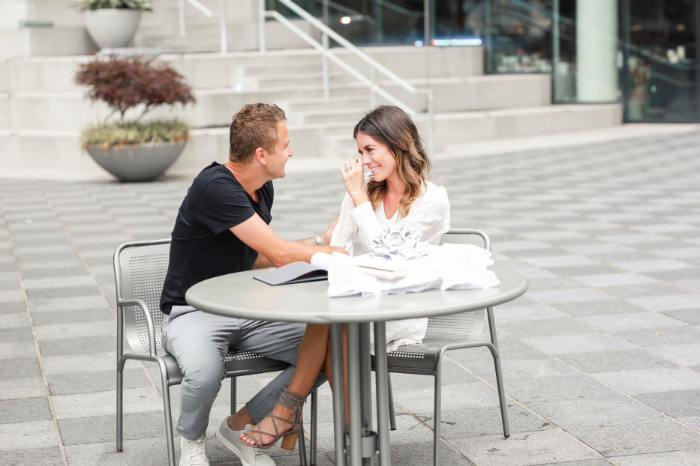 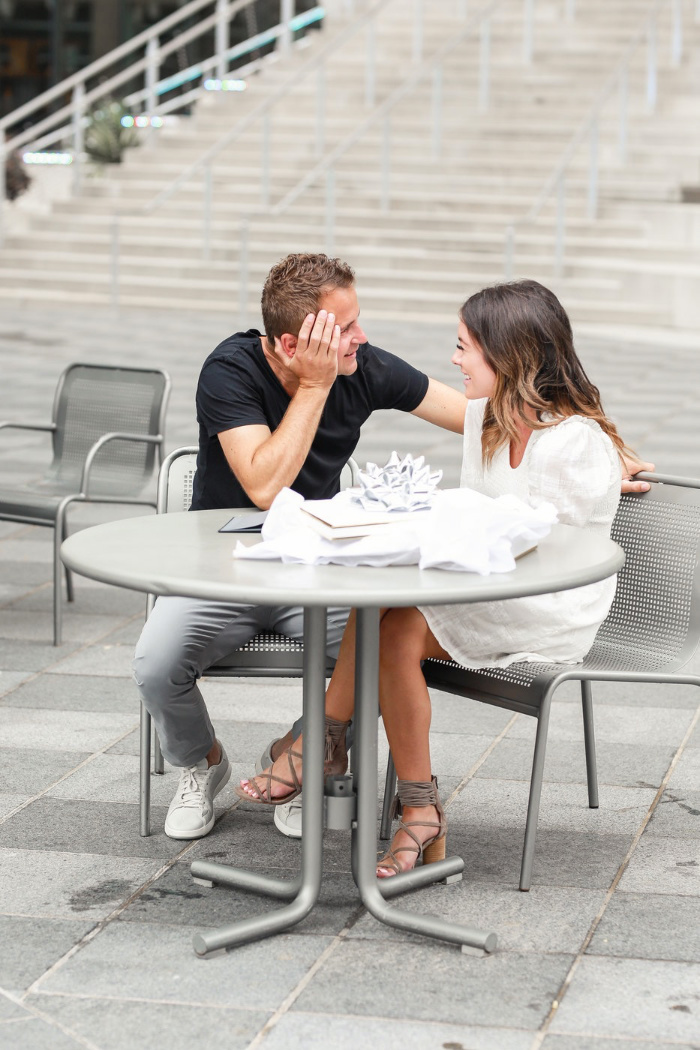 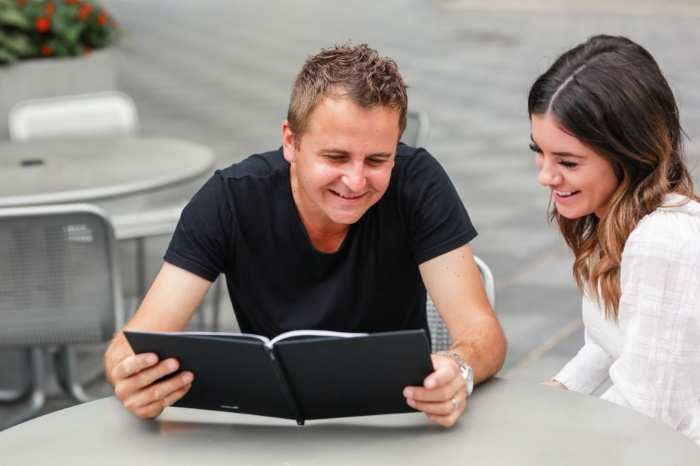 He was SO excited and we sat there for like 20 minutes just soaking it all in, hugging, crying and just in disbelief! It still feels so surreal, but we are so very thankful!!! 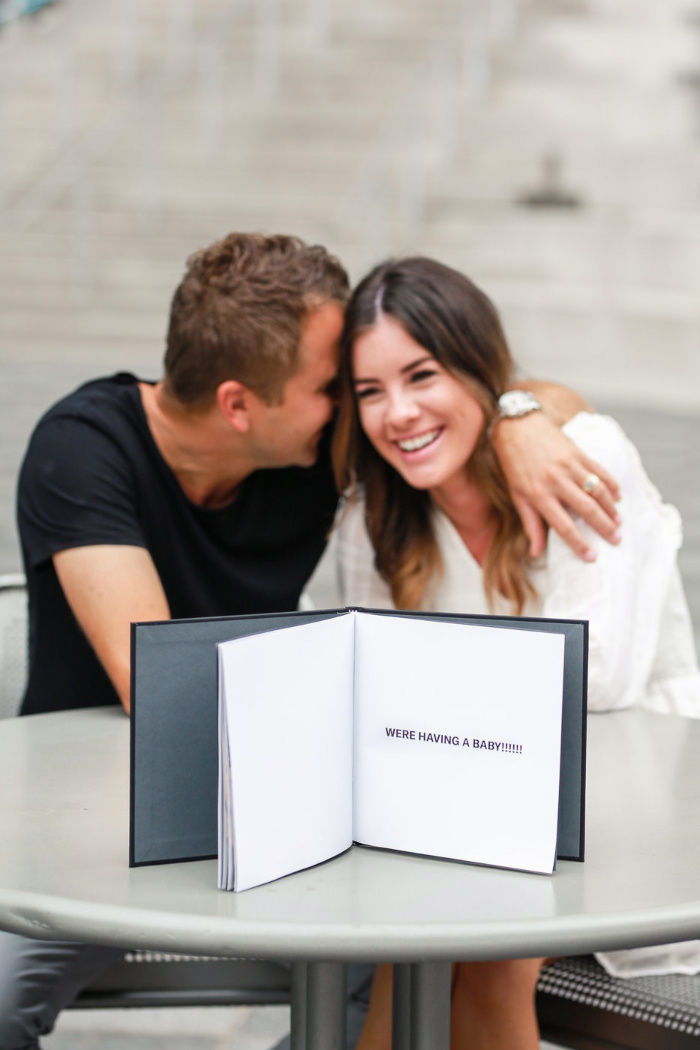 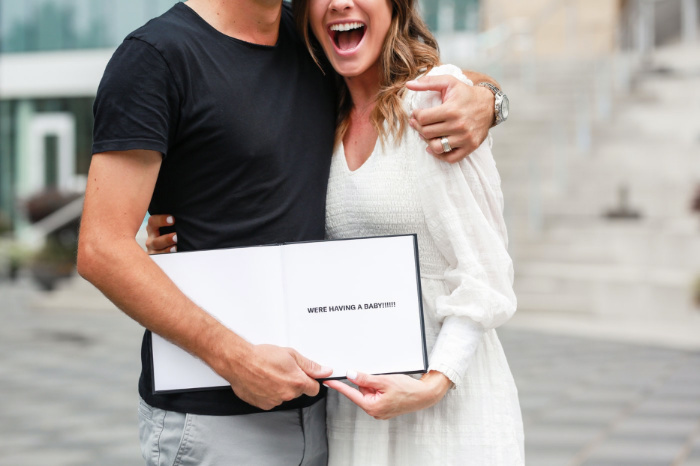 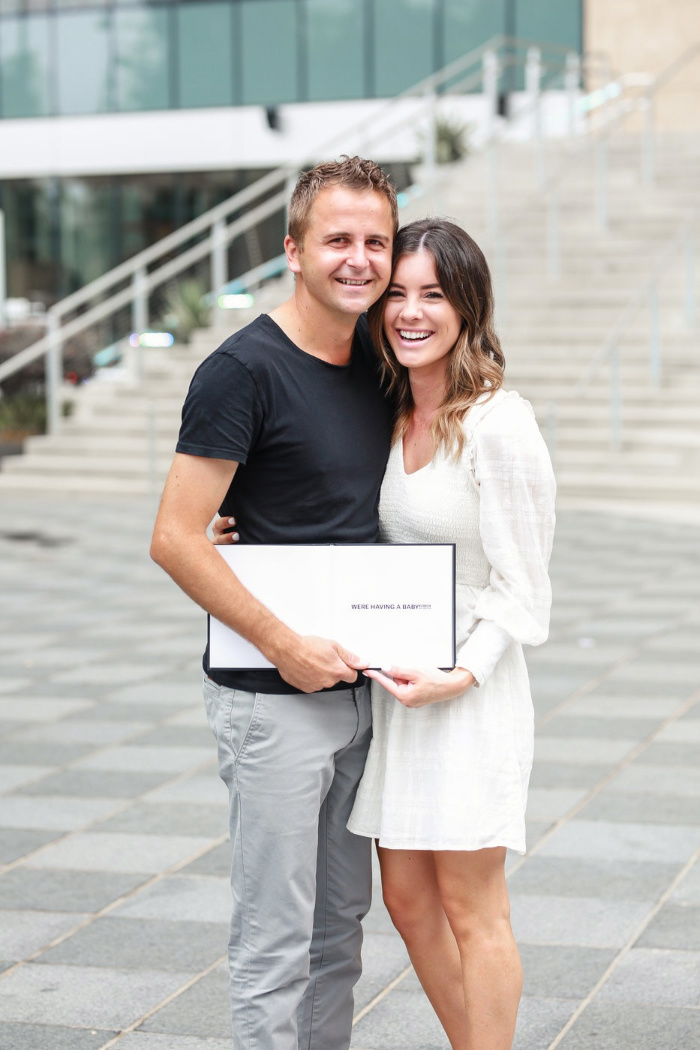 And here we are!! WE’RE HAVING A BABY!!!! I’m so excited for this next chapter and it’s been so fun sharing so many firsts together! We’re almost five months and we still sit there in awe that this is real life! I know I keep saying it, but it just feels so surreal! We knew God had a plan for us, but never knew if this would be one of them… we just went along waiting and just so thankful he chose us to be this little ones parents! My husband has been over the moon since this day and is just the sweetest ever! He always kisses me hi/bye and then talks to the baby every time we see each other/part, say goodnight/etc. He has always been so sweet/kind but something about this stage in our lives feels like I’m living a dream-he’s just so excited and always makes sure I’m ok/feeling great. I try not to complain but has been the best at making sure I feel good/getting me what I need thinks I’m the most beautiful thing ever when I feel my worst which for a good while was like every single day haha! So cheesy, but I never want to forget these moments! He is so obsessed with this baby and he hasn’t even met it yet; I can’t wait to see him as a dad! ❤️
Baby
1 Comment
Share